In art, Year 5 have been learning about the artist Hokusai. To begin with, the children watched an art talk about his famous artwork ‘The Great Wave’. They learnt that it wasn’t actually painted but was created through the artist designing and carving a wood stamp which he then painted and printed. This artwork was done in 1830 when Hokusai was 70 years old. Even though the piece is famously known as ‘The Great Wave’, the actual name for it is ‘Under the Wave at Kanagawa’.

After completing some research, year 5 had a go at creating the wave themselves. They watched a video on how to construct a simple drawing and how to make the wave look like it is moving by using curved movement lines. They then chose mixtures of ocean colours such as blues, greens and purples to paint their lines using watercolours. What beautiful pieces of work you have created Year 5, well done! 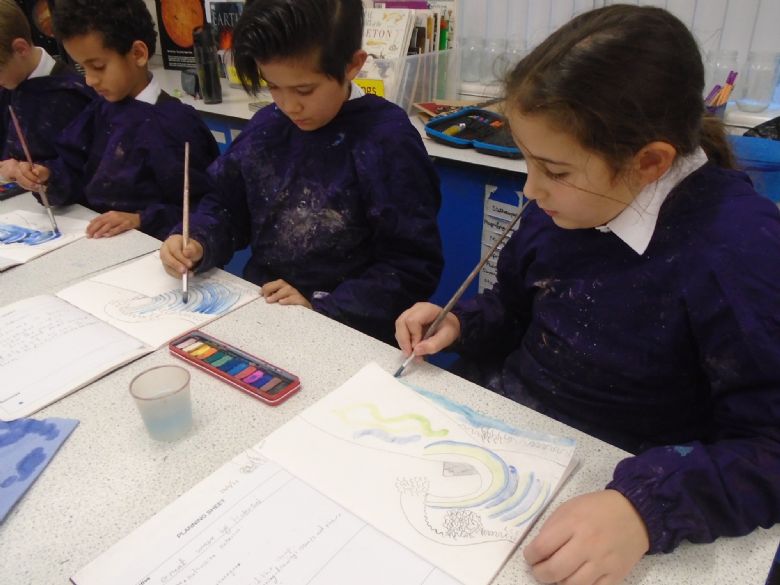 Year 5 were asked, to research a topic of their choice on Ancient Greece, as an extended homework task. They were to present it as a non-chronological report including such features as: sub-headings, bullet points, fact boxes, pictures with captions and diagrams. The children worked incredibly hard on this cross-curricular project.  We had a lovely session, looking at the reports: each child placed their work on their table and then rotated around the classroom reading the reports. They positively assessed each report, writing brief notes about what they particularly liked. The reports will be collated into a class ‘book’ on Ancient Greece. 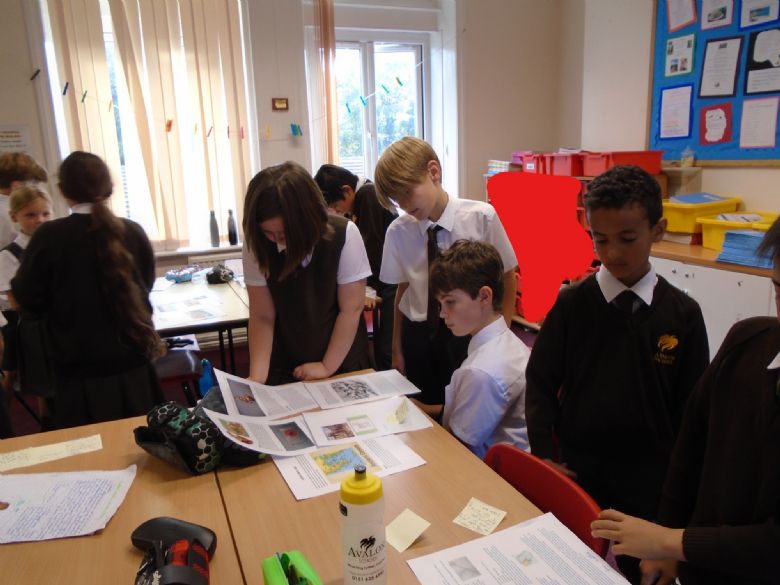 In Year 5, as part of their Earth and Space topic, the children have been creating orrerys to model the solar system.

They chose to use card to create their planets, and used oil pastels to add more detail. They began by sticking the sun in the centre of their model and used compasses to create the planet’s orbits. They used wool to hang the planets from the orrery and made choices about using glue or sticky tape to stick the planets on. 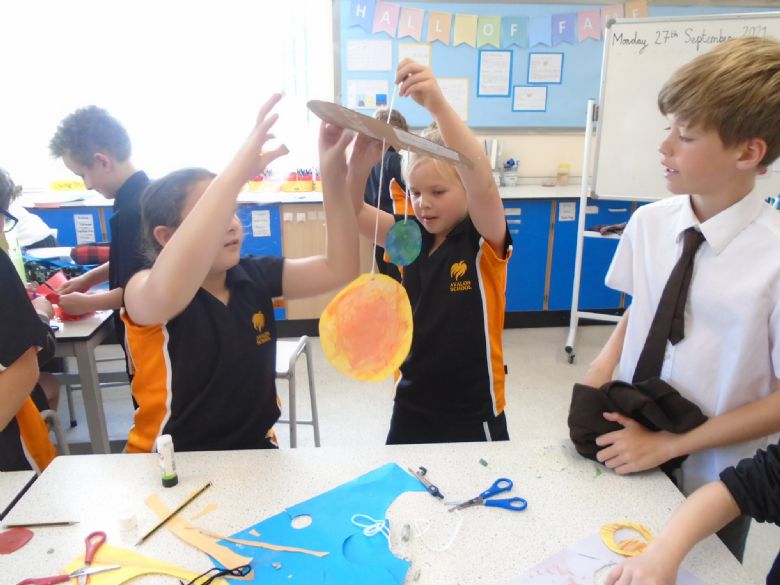 Year 5 have been learning down at our local beach, Cubbins Green in Caldy. Each session we have, the children look at their surroundings and predict whether the tide is coming in or out using navigational points and comparing it to when they arrive and when they leave. We looked at a tide timetable for the day and thought about when is high tide how that would impact on our beach. Later we made a tripod to learn a lashing and reef knot, and recapped last week's clove hitch knot - the knots required to make a shelter which is coming next week. Last week also had a Science lesson on the effects of air resistance and drag. To do this we built homemade wind socks from bin bags and string and raced them along the windy beach. Nobody managed to get theirs flying in the air, but we had some fantastic attempts. you can see some photos below. This week, the children took part in a maths lesson on the beach.  We looked  how to measure capacity as we are using a variety of containers, The levels will look very different but we noticed that all the capacity was identical as we had poured 1 measure of sand (100ml) into each different containers. Finally, and the children's favourite part, the children were asked to predict what will weigh more, 100ml of sand or 100ml of water. Really exciting stuff and great learning opportunities! 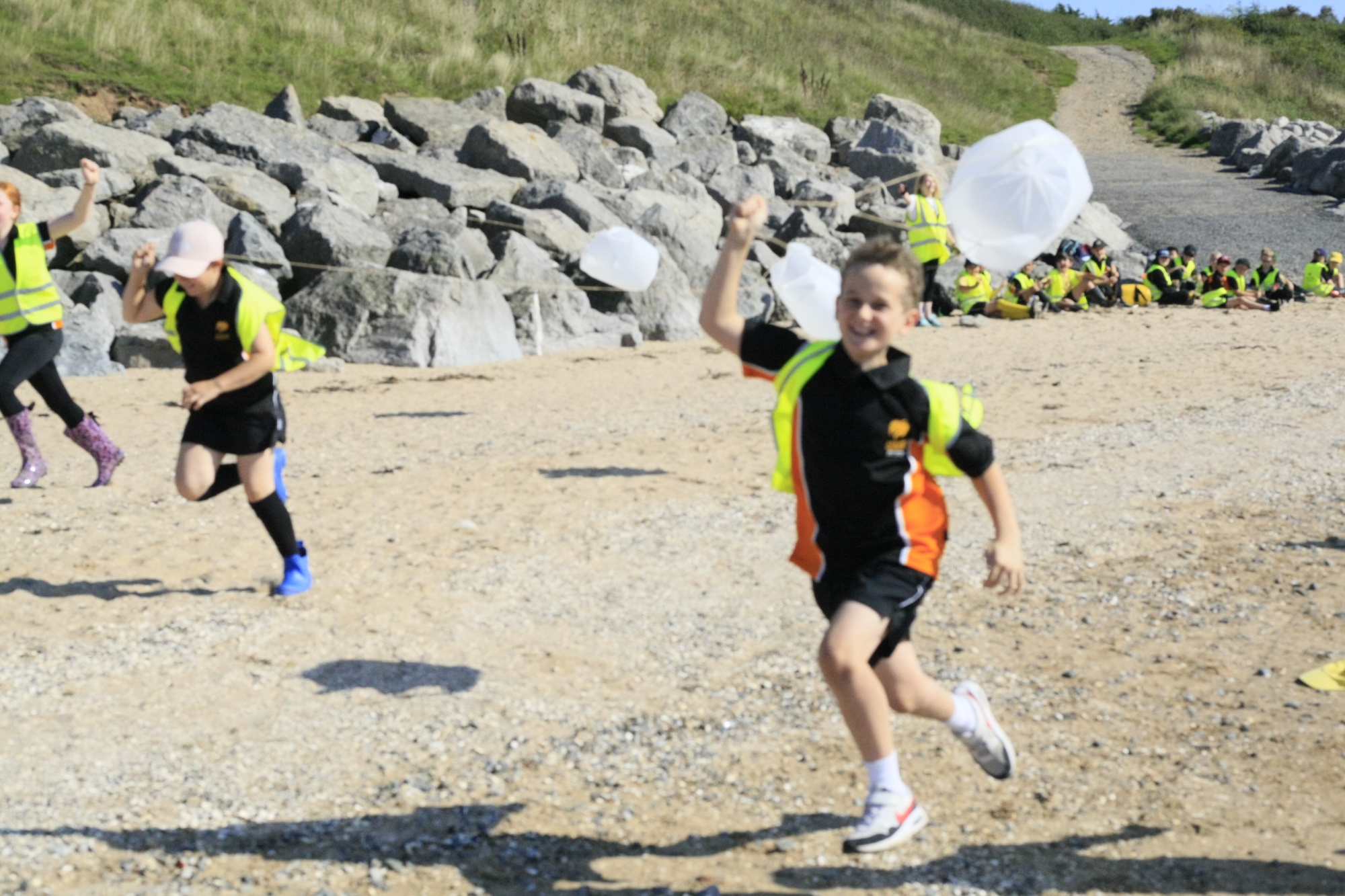