Year 3 have started their new topic on light and shadows in Science. To begin this topic, they have learnt that light travels in straight lines and even though light looks white, it is actually made up of 7 different colours: red, orange, yellow, green, blue, indigo and violet.  Firstly, year 3 made holes in a cardboard box, shone a torch inside and then looked through one of the holes, they noticed that the beam from the torch was pointing in a straight line like a spotlight and that the angle of where the hole is, helps or hinders you to see the light.  Then, they made whizzer wheels which were wheels of colour that they spun on a string and when they spun really fast, they would look white. Such fun! 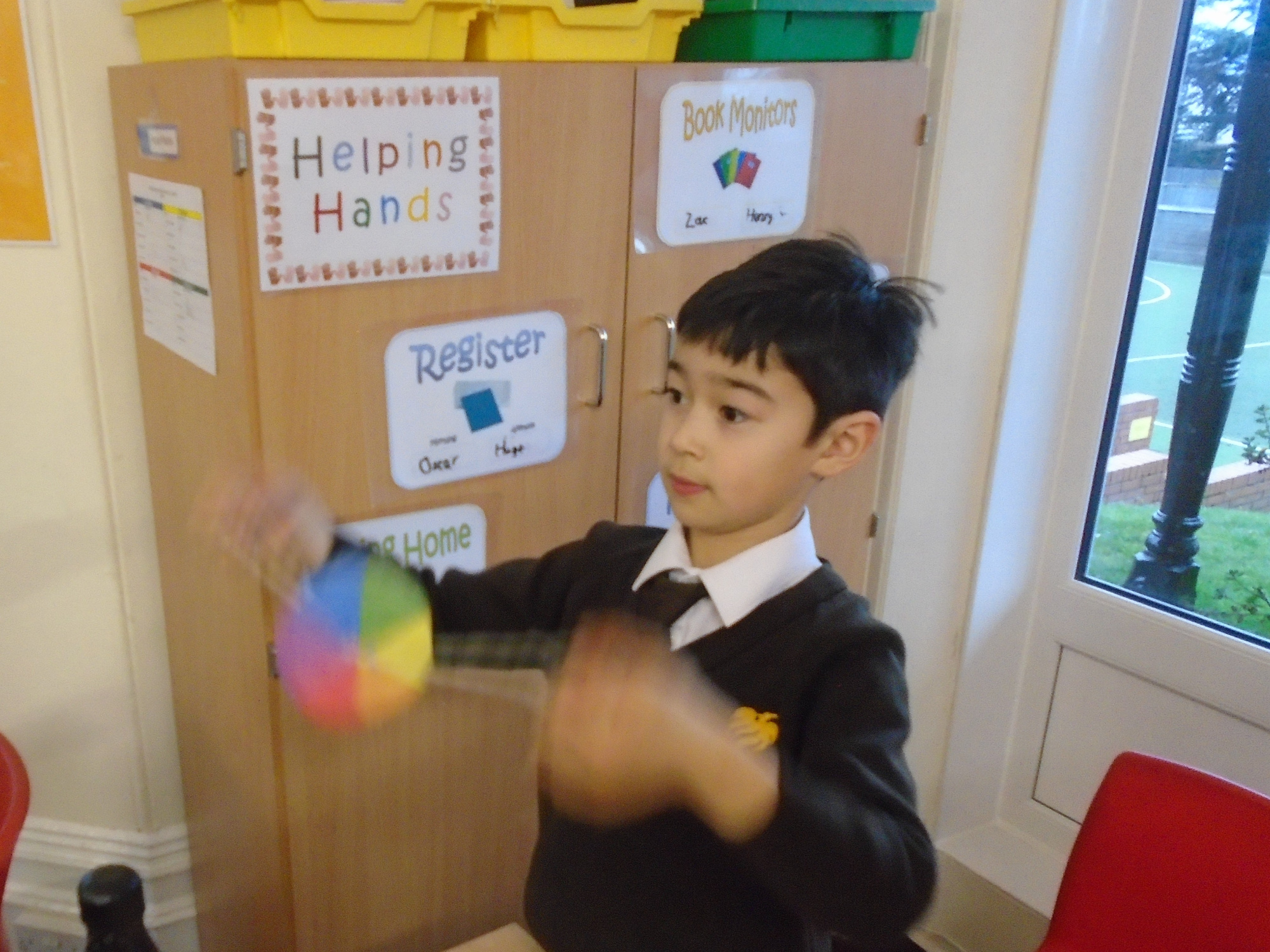 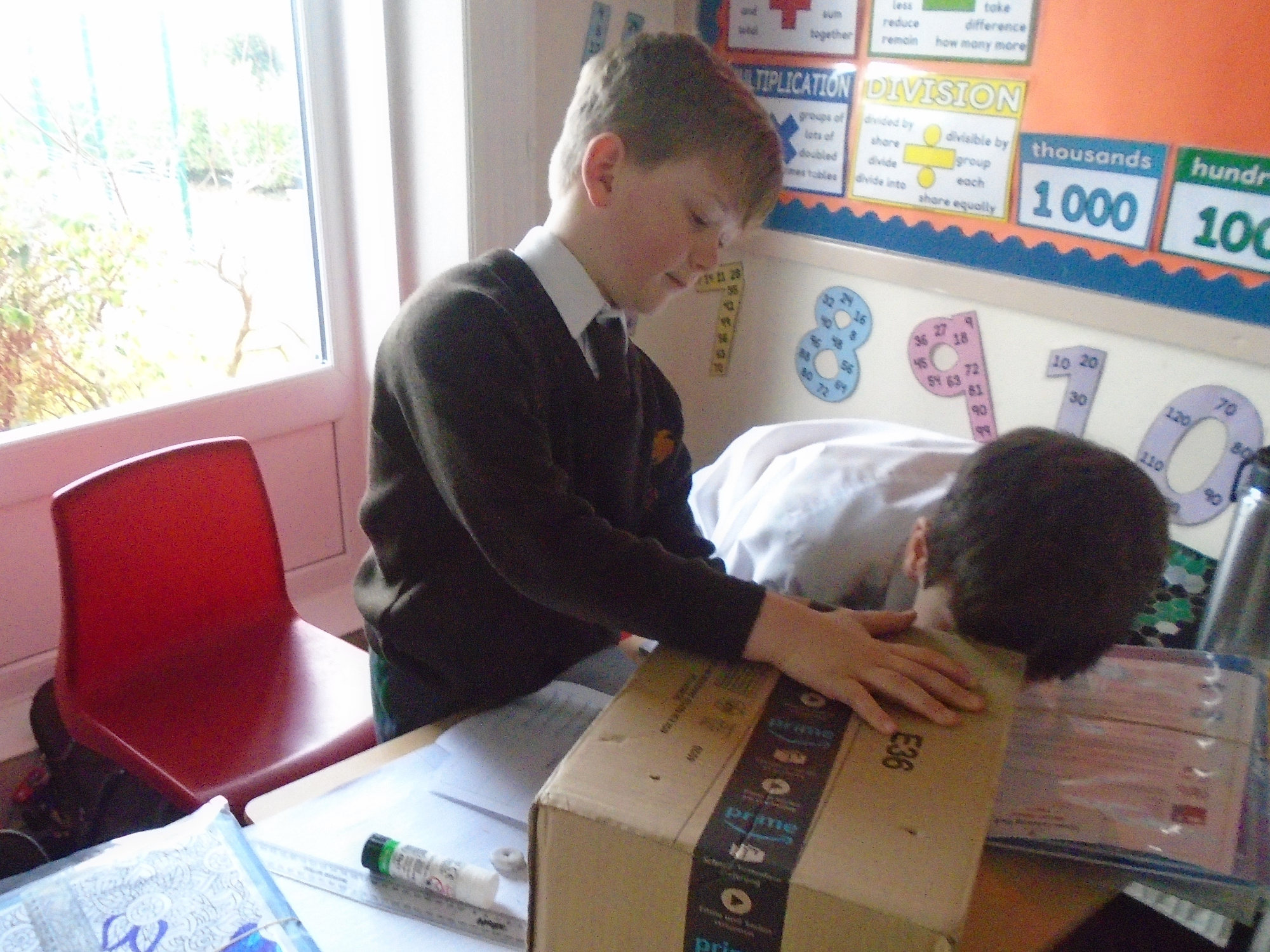 A Flash of Light

Year 3's new topic is called A Flash of Light. We love to make things cross-curricular and so created some beautiful art work on fireworks using salt and food colouring.  Firstly, the children put glue on their paper in the shape of fireworks bursting. Next, they gently sprinkled salt over the glue and made sure it stuck in the shape of the bursting firework. After that, the children carefully dropped a mixture of food colouring and water, suing pipettes, onto the salt and watched the colours come to life on the black paper. Finally, they repeated the activity so that they had multiple fireworks bursting from their paper.

The children learnt that the salt absorbs the water and food colouring to make the colours stand out, but if they put too much watery liquid on the salt, it would drip and things may have got a bit messy. Well done Year 3, an amazing start to 2021!  See the Year 3 Gallery for more photos. 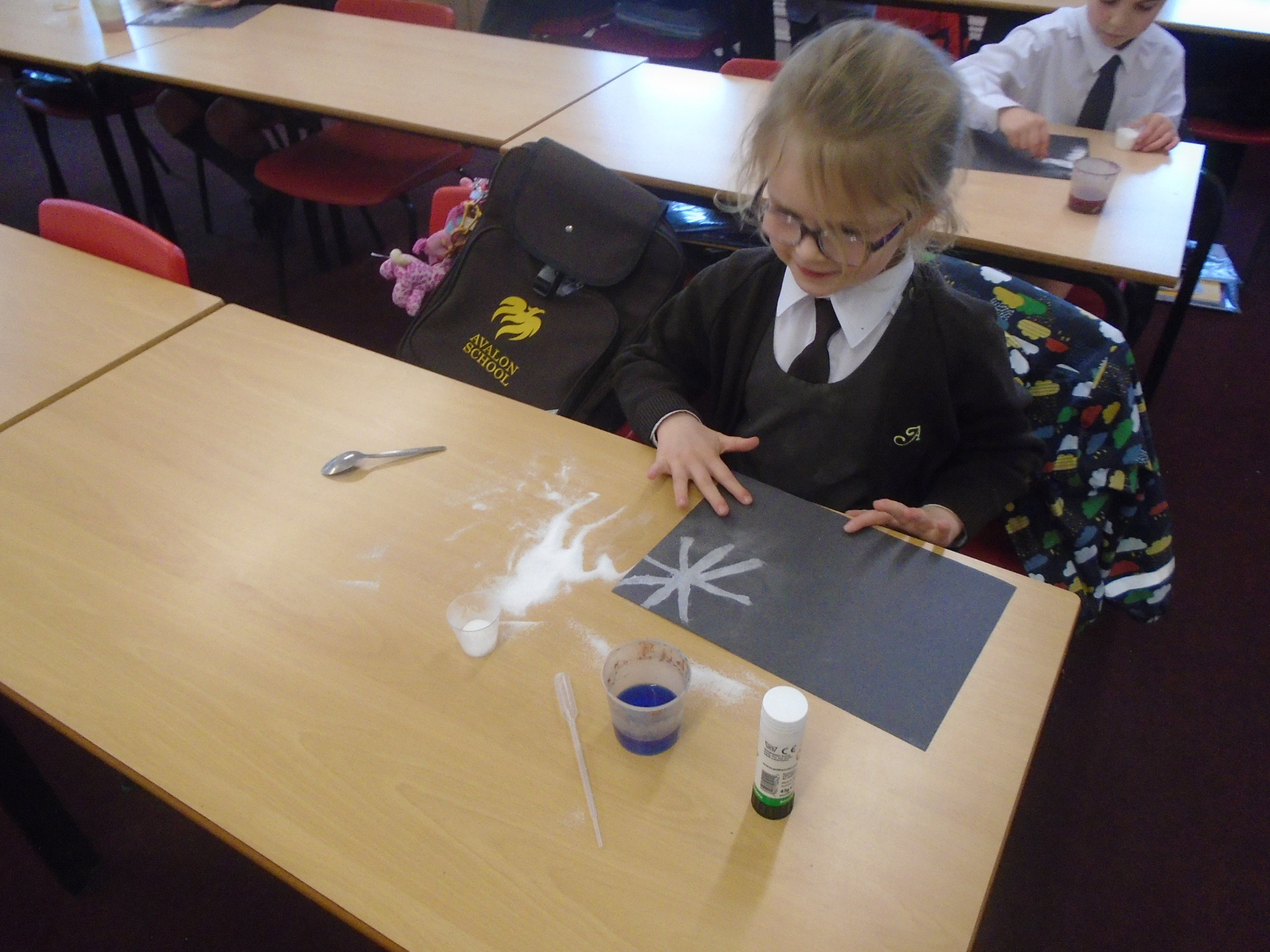 Year 3 have been learning about shape this week. They have learnt some new vocabulary such as symmetry, symmetrical, irregular and regular and recapped previous learnt vocabulary such as the names of 2D and 3D shapes. On Tuesday and Wednesday we learnt about symmetry and created snowflakes understanding that when we fold and cut parts of the shape, it creates a symmetrical pattern. On Thursday and Friday, we used our knowledge of 2D shapes to put them into groups. We gave these groups headings that described their properties. Year 3 worked really hard doing this and learnt a new type of diagram called a Venn diagram.  See the Year 3 Gallery for more photos. 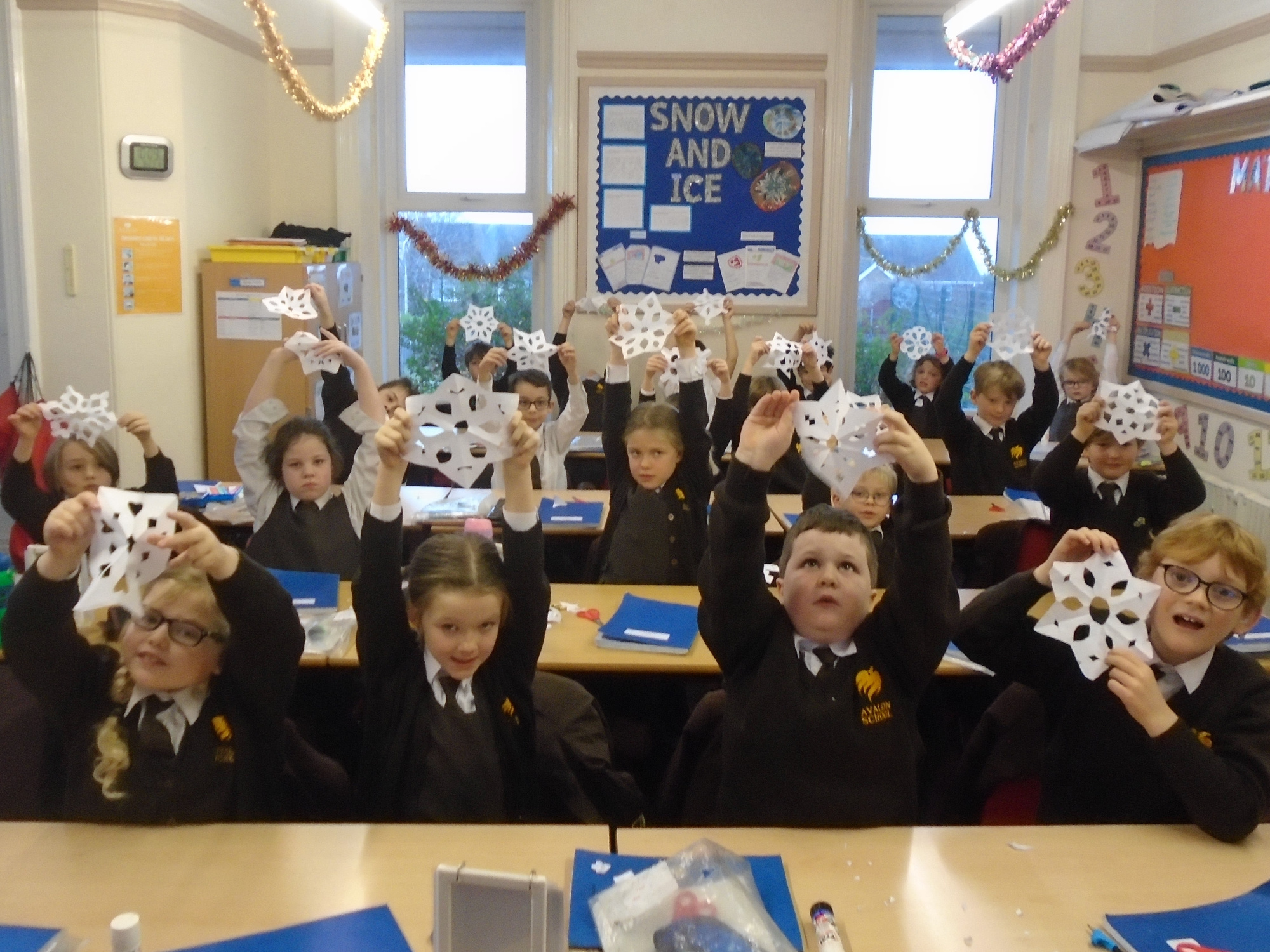 This week, Year 3 have been working on the topic of volume. We have had a fun week, measuring out amounts of coloured liquids to investigate whether the colour will change with the more liquid that we add. We concluded that the colour goes a bit lighter after adding 100mls of water.  Year 3 also linked their volume work to English by creating a potion in Mrs Creedon’s Potion Lab for our evil character Starjik who froze children in a tomb of ice. Some children made a potion to help Ivan (our hero) and save the children, other members of the class made a potion to support Starjik and freeze the young children. To create their potions, the children measured out different liquid from Mrs Creedon’s Potions, added them together in their own potion bottles, wrote instructions for their potions and then added up all the volumes of liquids at the end. What a fun week. Well done Year 3!  See the Year 3 Gallery for more photos. 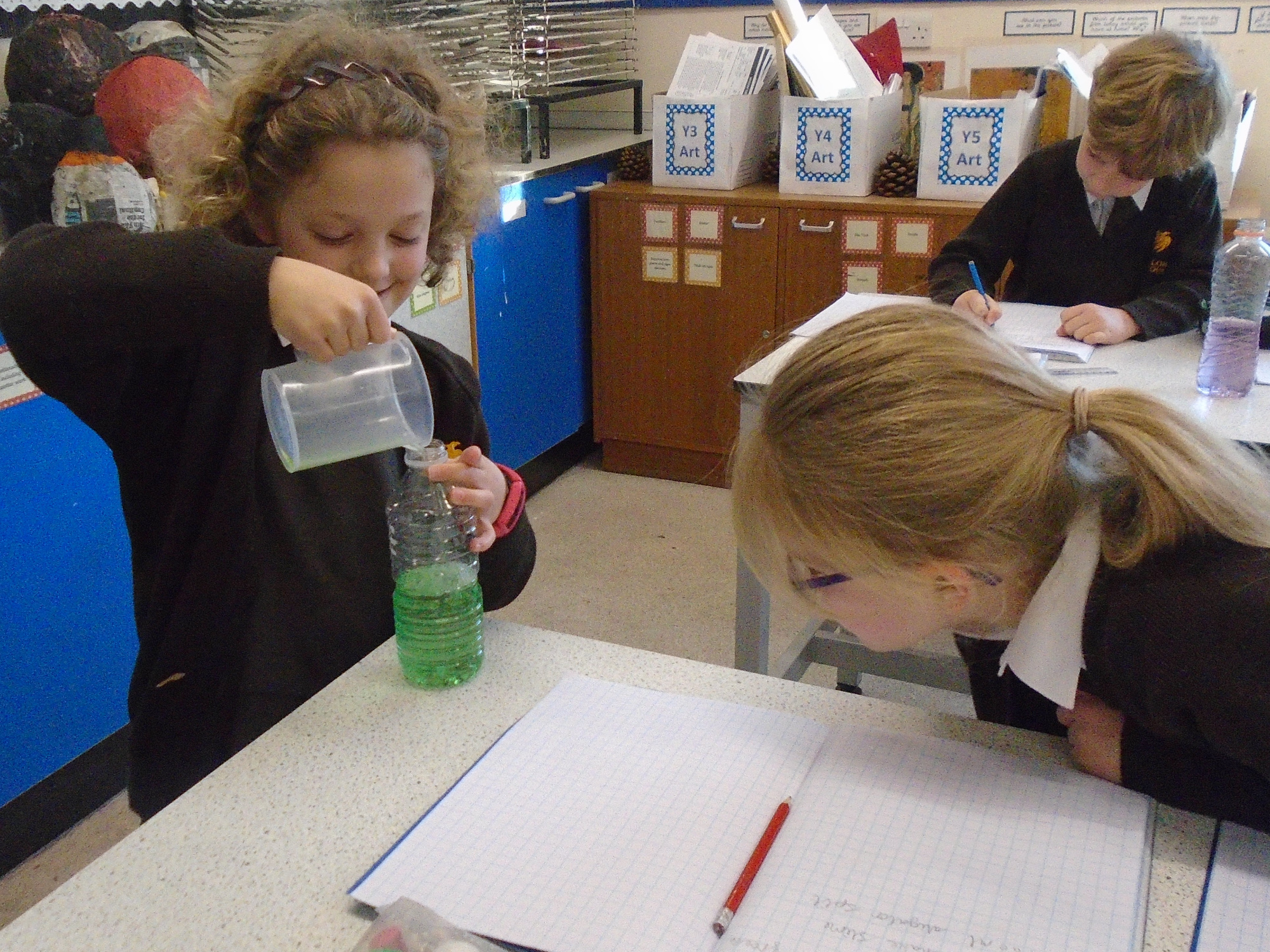 During the month of November, the juniors are participating in a 'Burpee' challenge to improve their fitness and develop their core strength in the pursuit of achieving their target of 2000 for all of the year groups combined.  Year 3 have smashed their target and have managed almost 2,500 for their year alone, a superb achievement, very Well Done!  Year 3 are also learning netball skills which include how to defend, pass and catch the ball as well as quick footwork, rising to the challenge with great enthusiasm.  See the Year 3 Gallery for more photos. 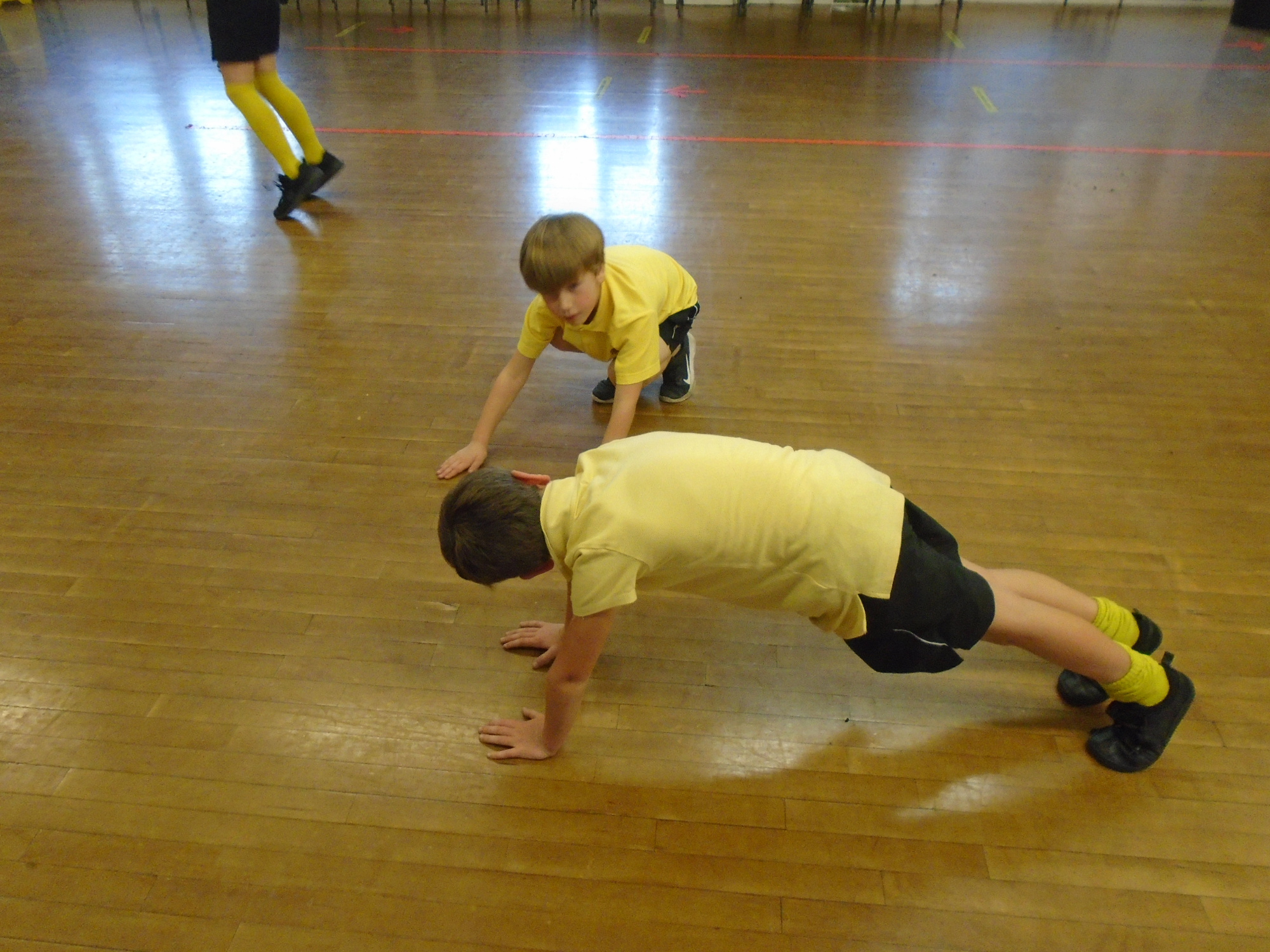 Year 3 have been contacted by an alien, Zinnia, from a planet called Dock 5. They have been observing our planet and noticed that we like to travel. This made them decide to build a hotel on their planet for us to travel to. However, they have asked for our help on what foods we humans eat so that they can build a farm to grow these foods. Year 3 have been investigating what plants need to grow healthy and what parts of plants that we eat.  During this lesson, we looked at a wide variety of fruits and vegetables and discovered that we actually eat different parts of plants such as; the stem, the roots, the flower, the fruit, the leaves and the seeds! The children have drawn and labelled some examples of these to send to Zinnia and help them with their hotel and farm.  See the Year 3 Gallery for more photos. 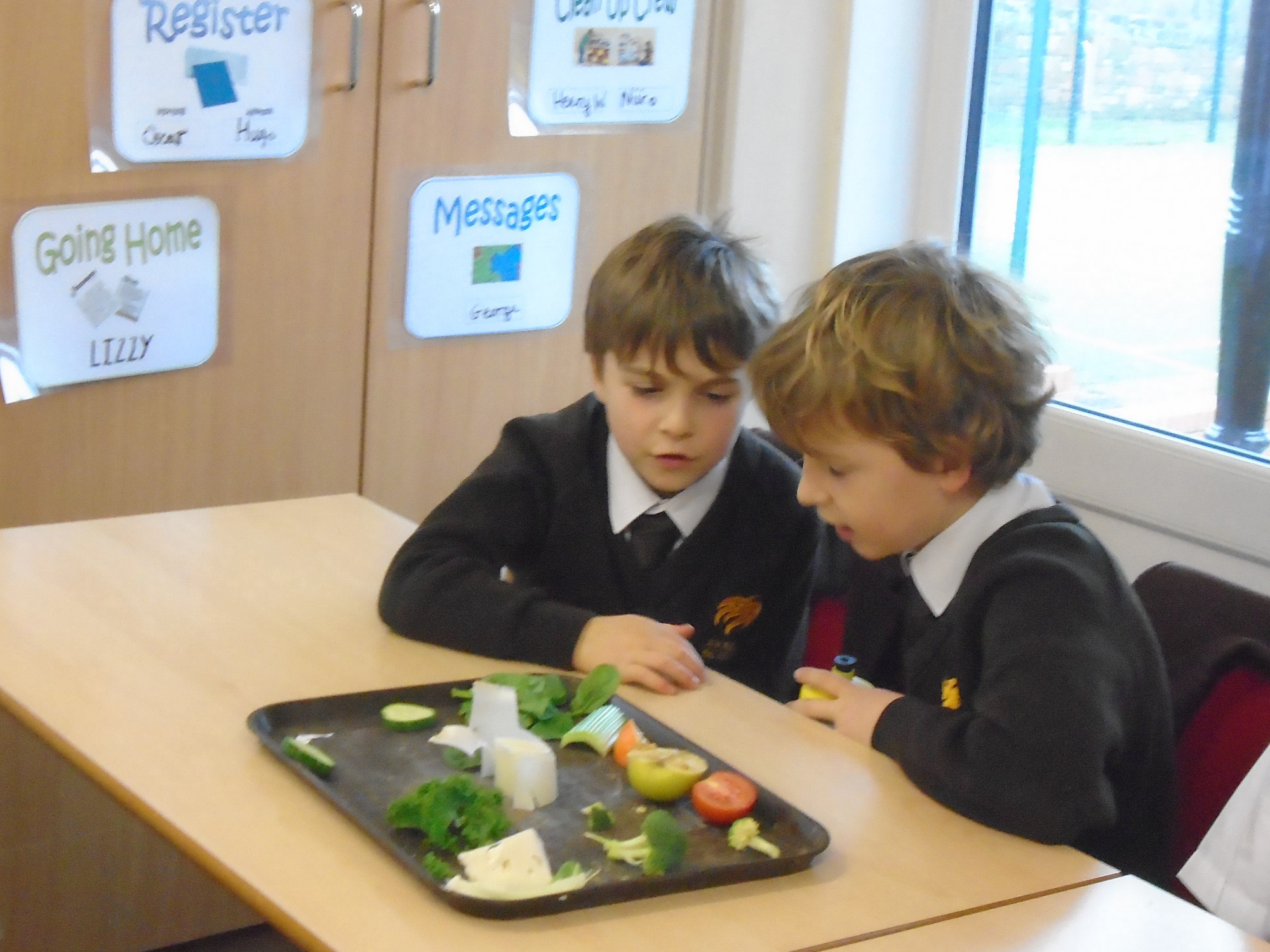 Poems about the story Ice Palace

Year 3 have created an aural performance poem showing their understanding of our story ‘Ice Palace’. They constructed the poem by; one group repeating the dastardly character’s name ‘Starjik’, another group whispering warnings to the villagers that Starjik is coming and a third group stating kenning to describe the evil Starjik, e.g. child snatcher. Listen to the video and see if you can pick out the three different parts. We hope you enjoy it!

Half Price Sale in Maths

Year 3 have been learning about halving.  Mrs Creedon was having a half price sale in her chocolate shop and needed some helpers to work out the new prices. Year 3 were fantastic helpers, using partitioning to find the answers.  Mrs Creedon was very grateful. 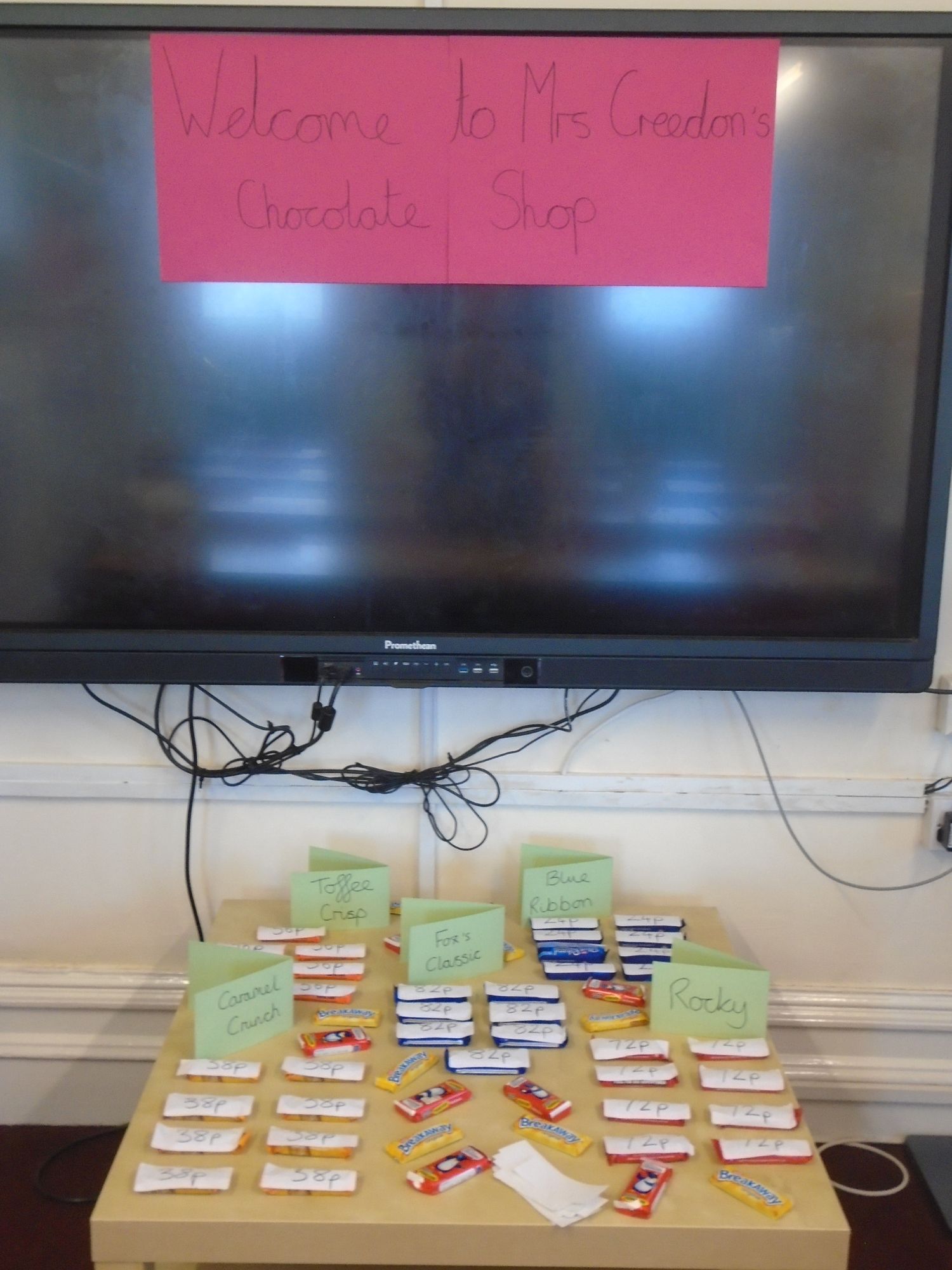 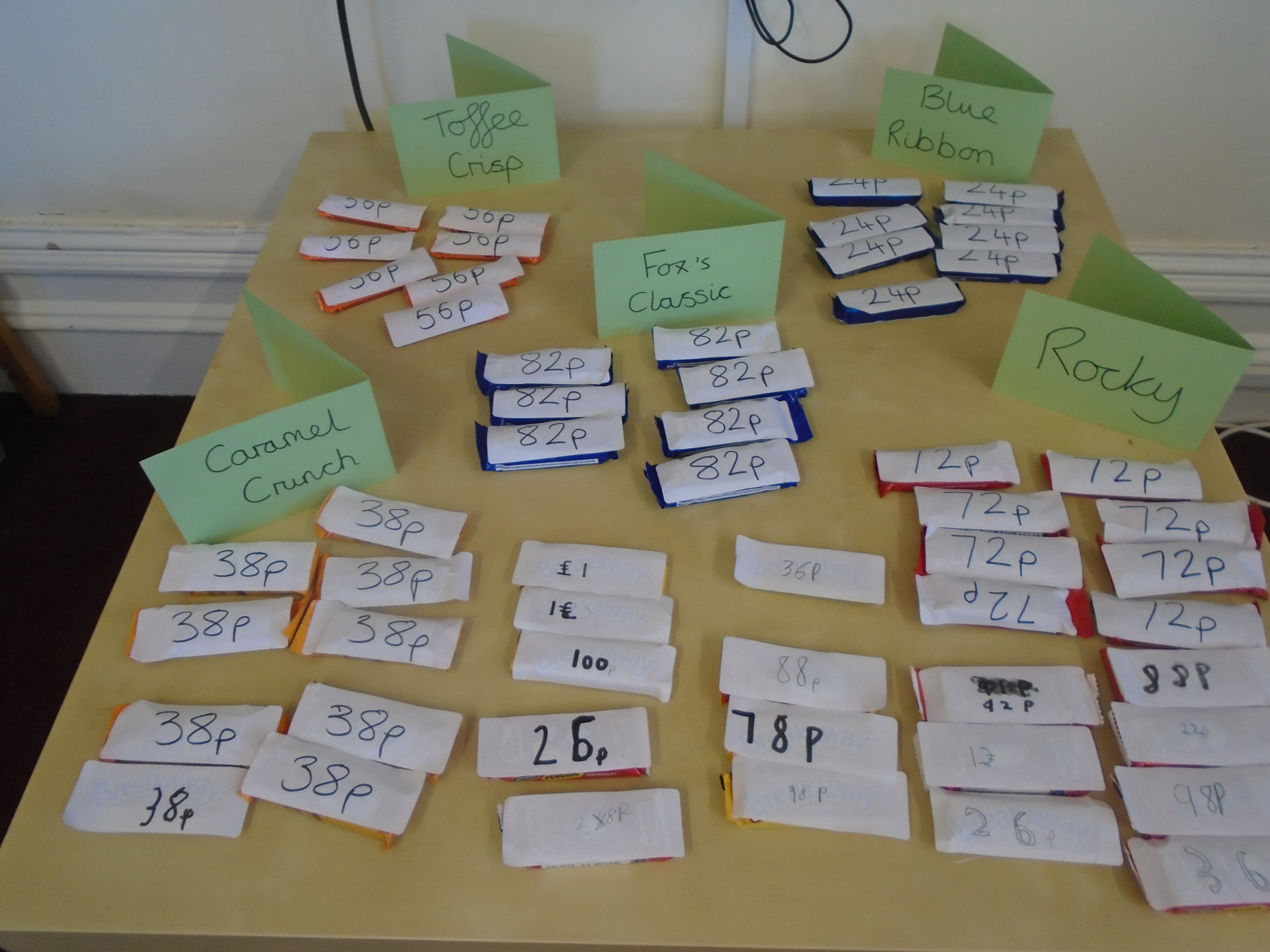 Year 3 have been helping Mrs Callaway organise chairs in the hall for a meeting.  They had 36 chairs and had to follow the rule of the same amount of chairs in each row. Year 3 worked out a few solutions to this problem including; 6 rows of 6 chairs (6 x 6 = 36) and 3 rows of 12 chairs (3 x 12 = 36). They also discussed division by working out if they had 36 chairs, they wanted 6 rows which meant they needed 6 chairs in each row. Fantastic job Year 3!  See the Year 3 Gallery for more photos. 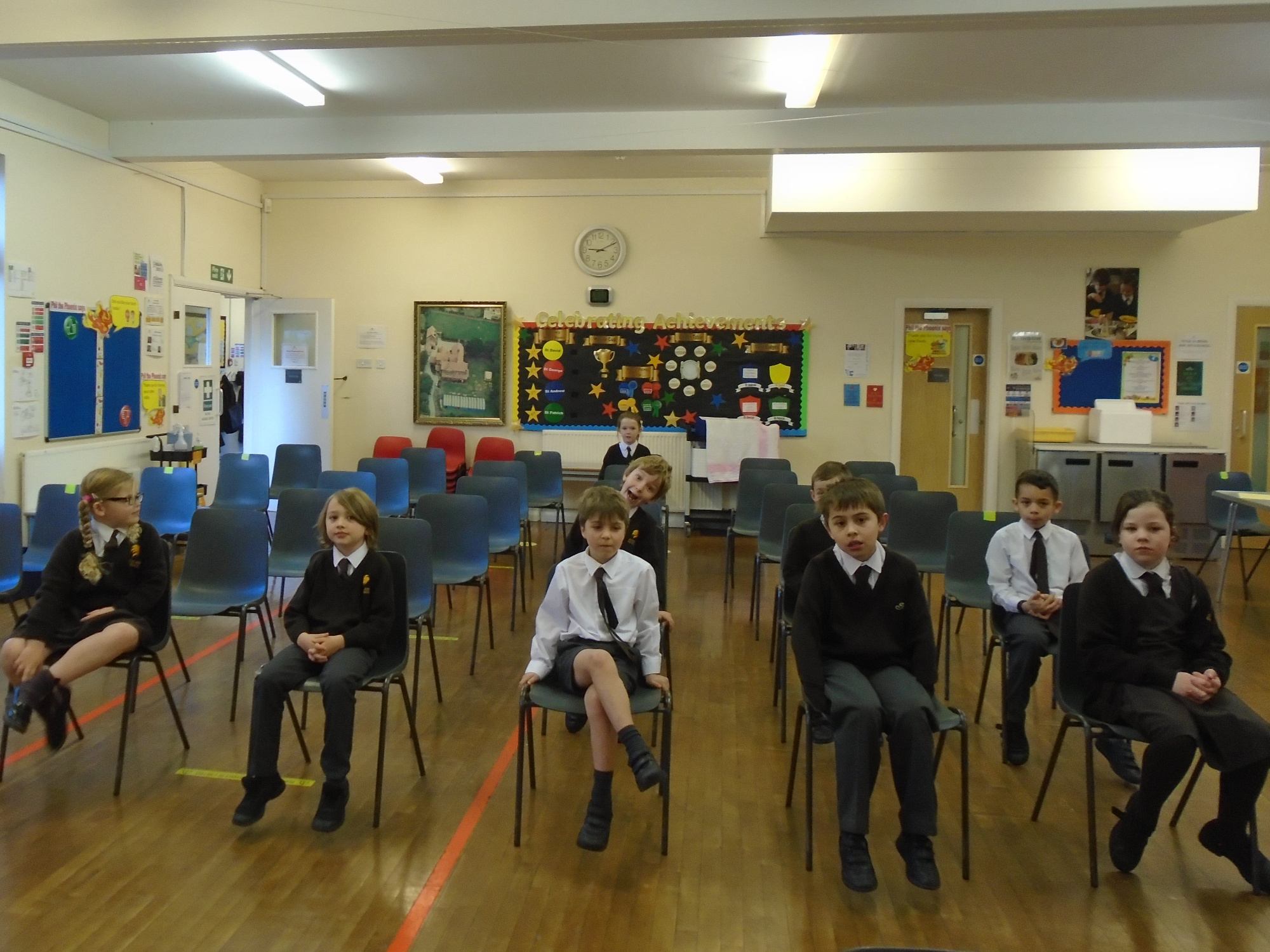 In PSHCEE, Year 3 have been looking at keeping our bodies healthy through eating a balanced diet and doing physical exercise. We created our favourite meal, ensuring we use the right amounts of each food groups to keep it healthy. In addition, we discussed what types of exercise we do inside and outside school and had a go at being a leader and doing some exercises on the field such as, star jumps, tuck jumps, press ups and sit ups. 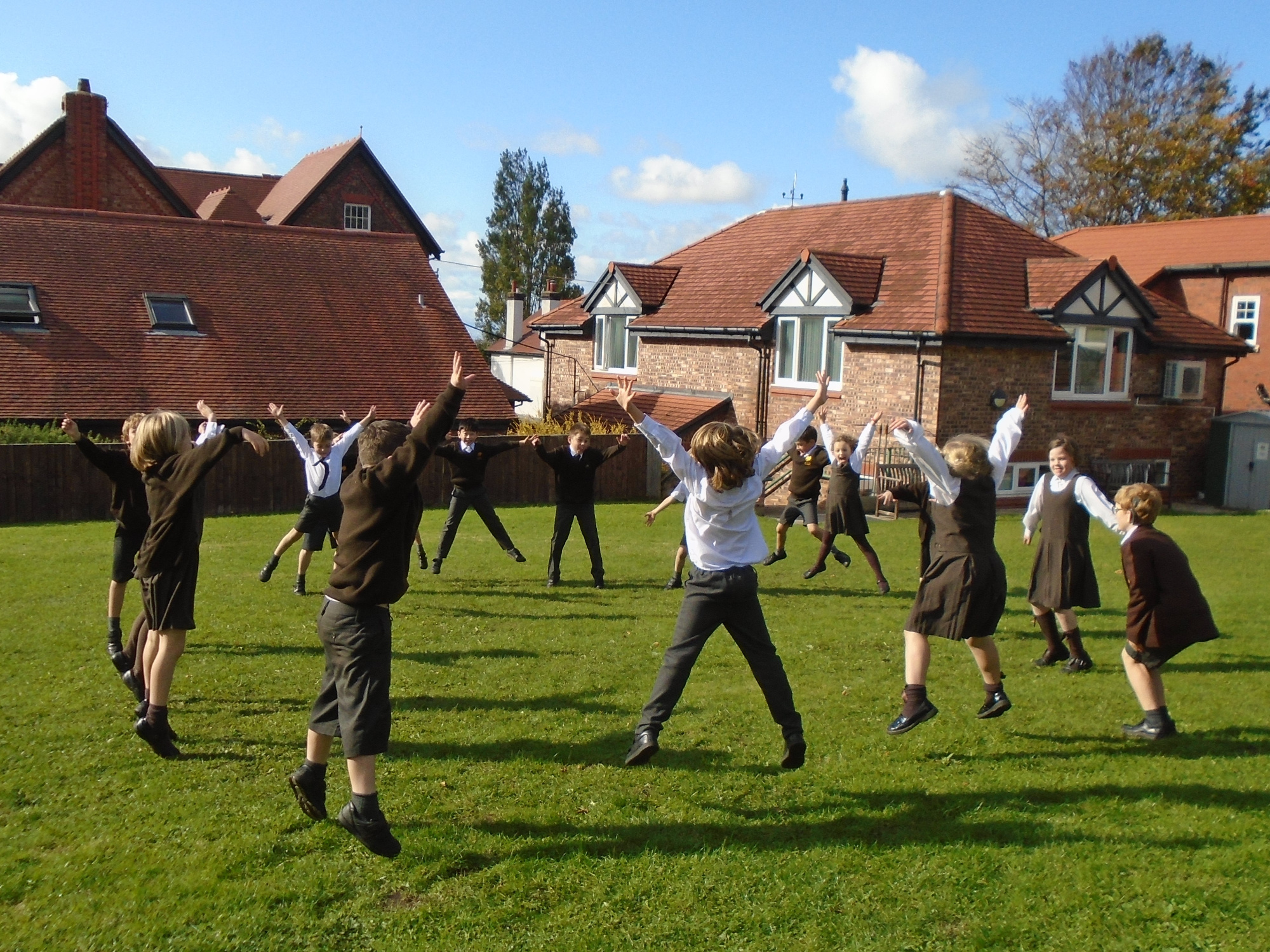 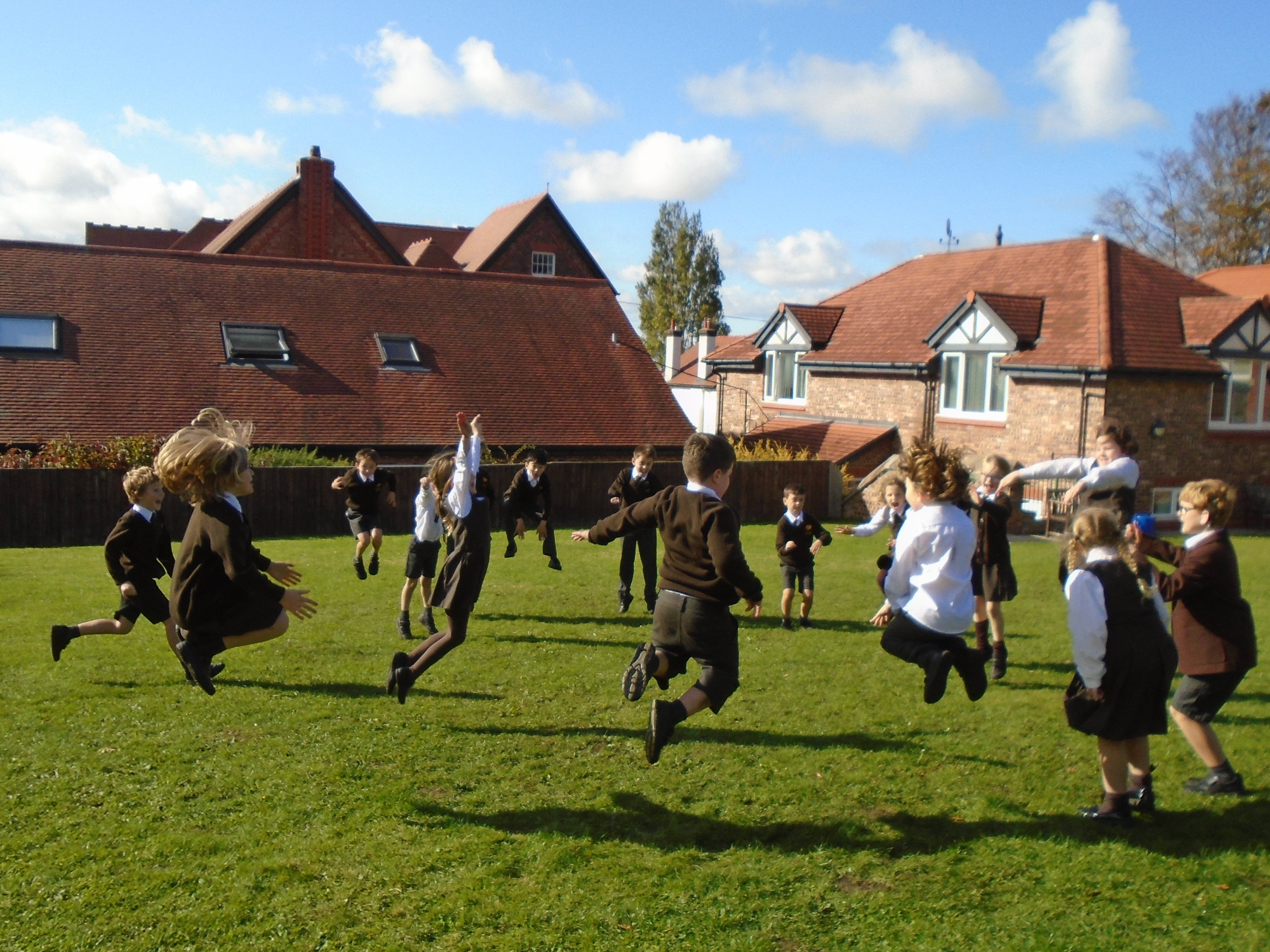 Living in the Stone Age

As part of our cross-curricular learning on the topic of the Stone Age, the children became Stone Age people and explored the outdoor forest area, finding objects that may have been used within the Stone Age time. For example; logs,  rocks and 'flints' to prepare and light a fire, sticks to make spears and stone to sharpen spears. Great imaginative work! 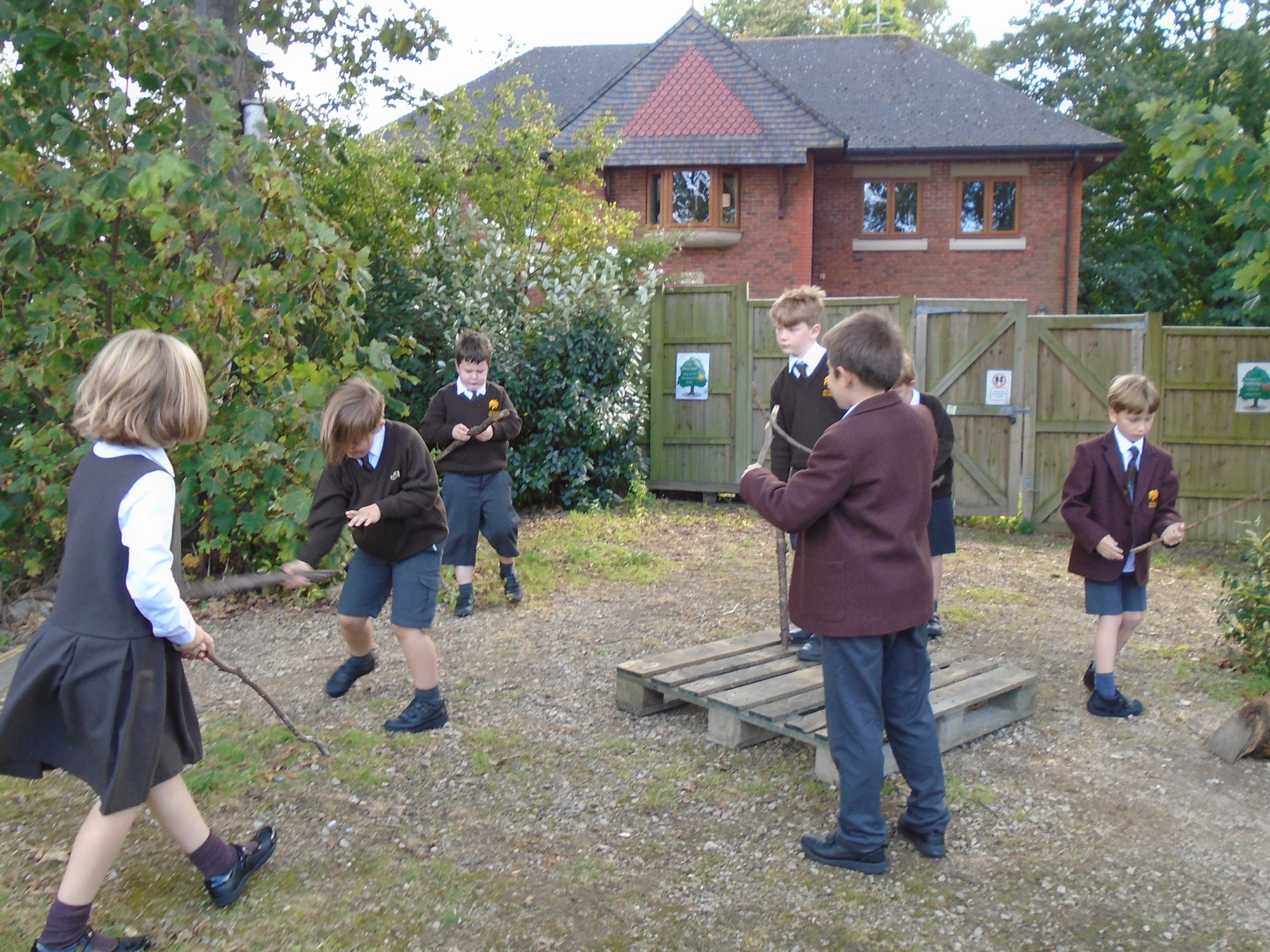 On returning to the class room the children were then able to draw their choice of weapon in, an Art lesson and write a detailed instruction on how they would construct their weapon and what it's use would be, in an English lesson.

Working both independently and sometimes with a partner, the children showed great enthusiasm as they followed their own instructions, critically thinking how to manipulate and calculate the best way to complete their design using just the raw materials they had collected  (only a little support from small pieces of string to strengthen their weapon!). Upon completion, each child was keen to show and explain their weapon and it's purpose to their classmates.  See the Year 3 Gallery for more photos.

Learning about Chronological Instructions in ICT

During the ICT lesson, Year 3 are continuing with cross curricular English activities, learning the importance of detailed, chronological instructions.  The children are being taught how to cut, paste and reorder a series of instructions whilst developing their touch screen and mouse control. In last week's ICT lesson, Year 3 have learnt the correct way to make a "Cup of Tea"- hopefully something they will be able to do for all of their parents in the future!  See the Year 3 Gallery for more photos. 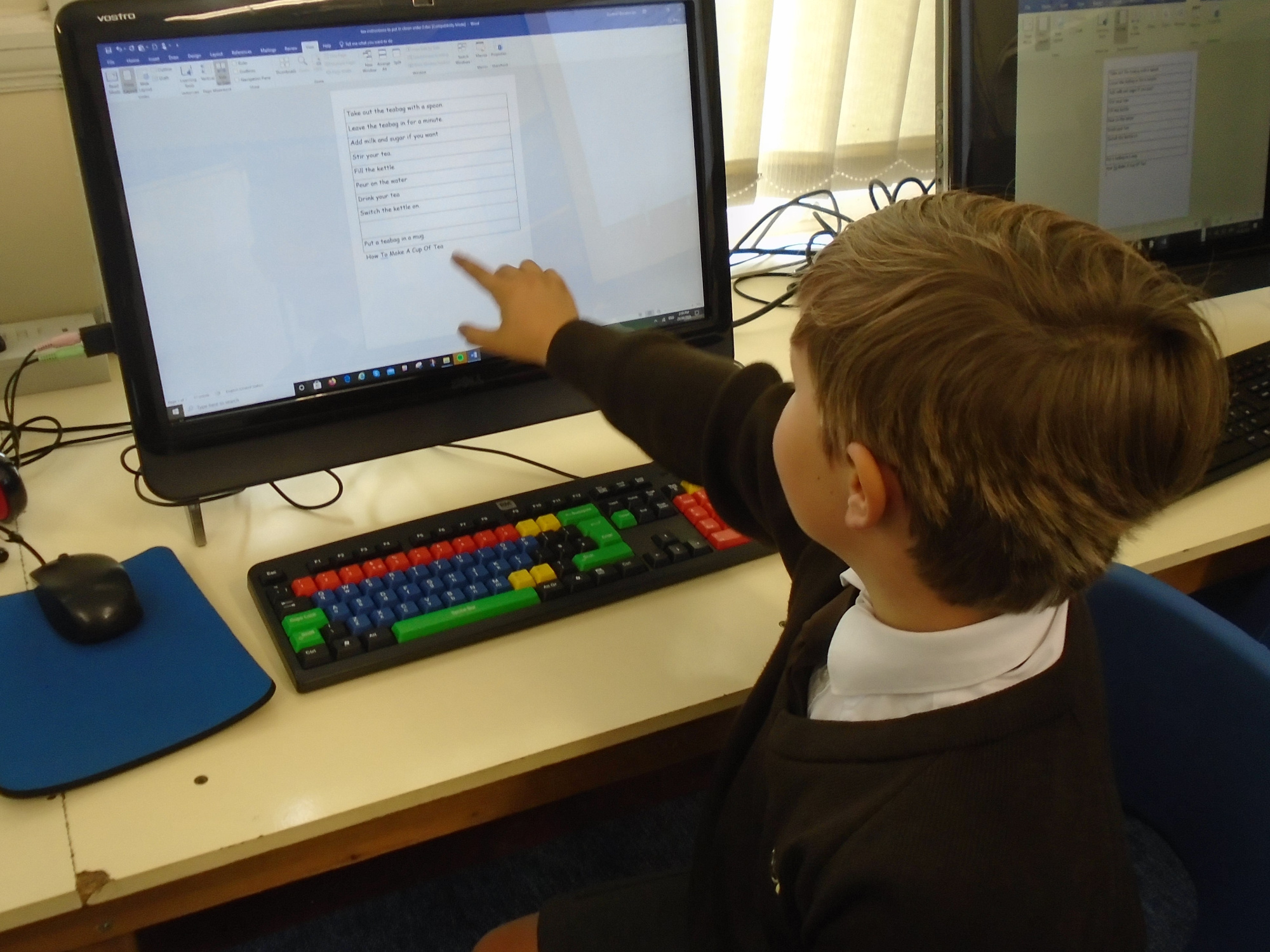 This term, Year 3 have been working on the topic of Rocks. They have been understanding how rocks were formed and discovering their properties through observations and investigations. Igneous rock is formed when magma from a volcanic eruption cools and hardens. Sedimentary rocks is formed when small bits of sand, rock and bones of dead creatures settle at the bottom of the sea and are pressed down with layers over millions of years. Metamorphic rocks is formed when igneous or sedimentary rock is put under a lot of heat or pressure. In this investigative lesson, they looked at the hardness, permeability and appearance of a variety of igneous, sedimentary and metamorphic rocks to discover their properties. 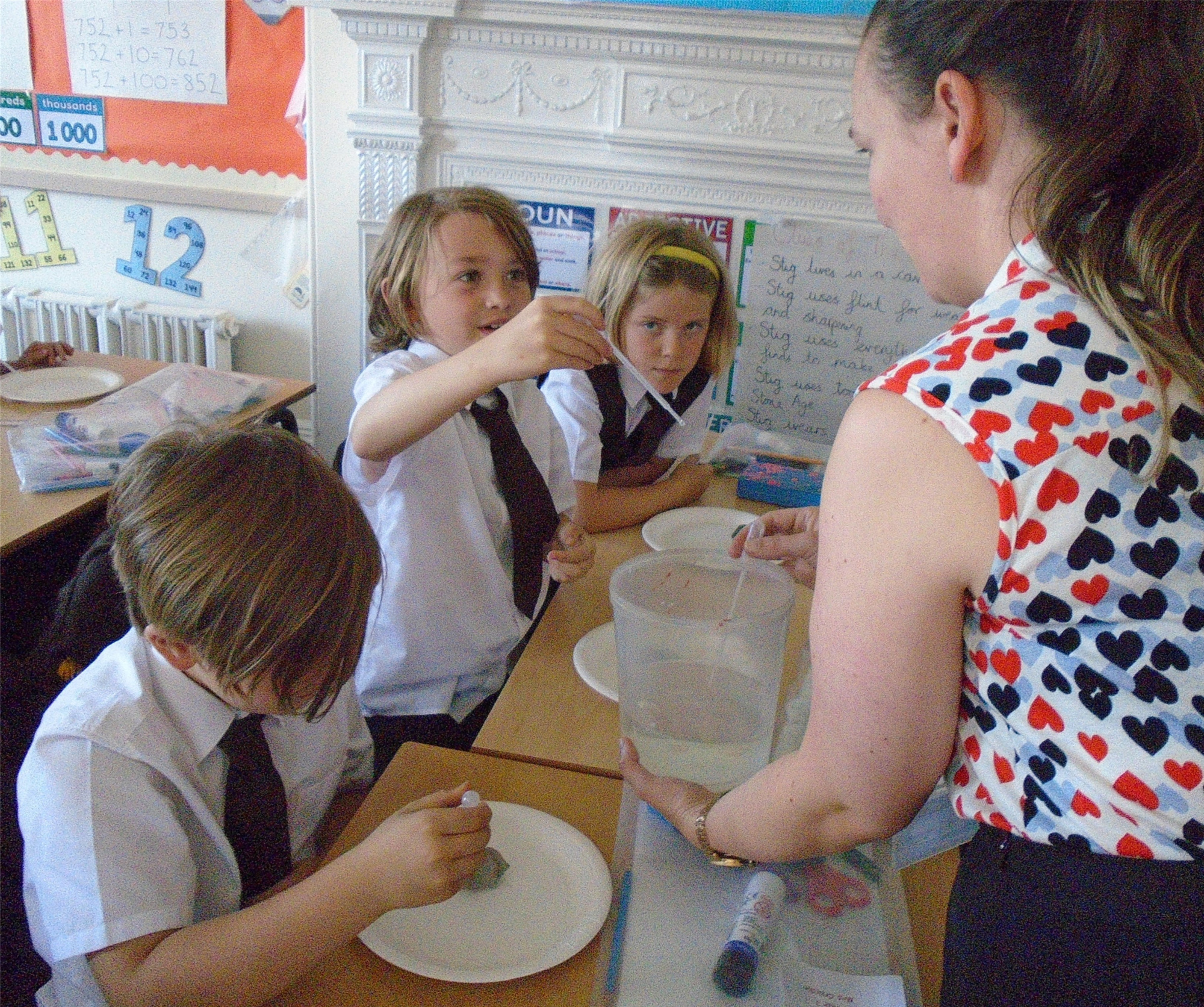 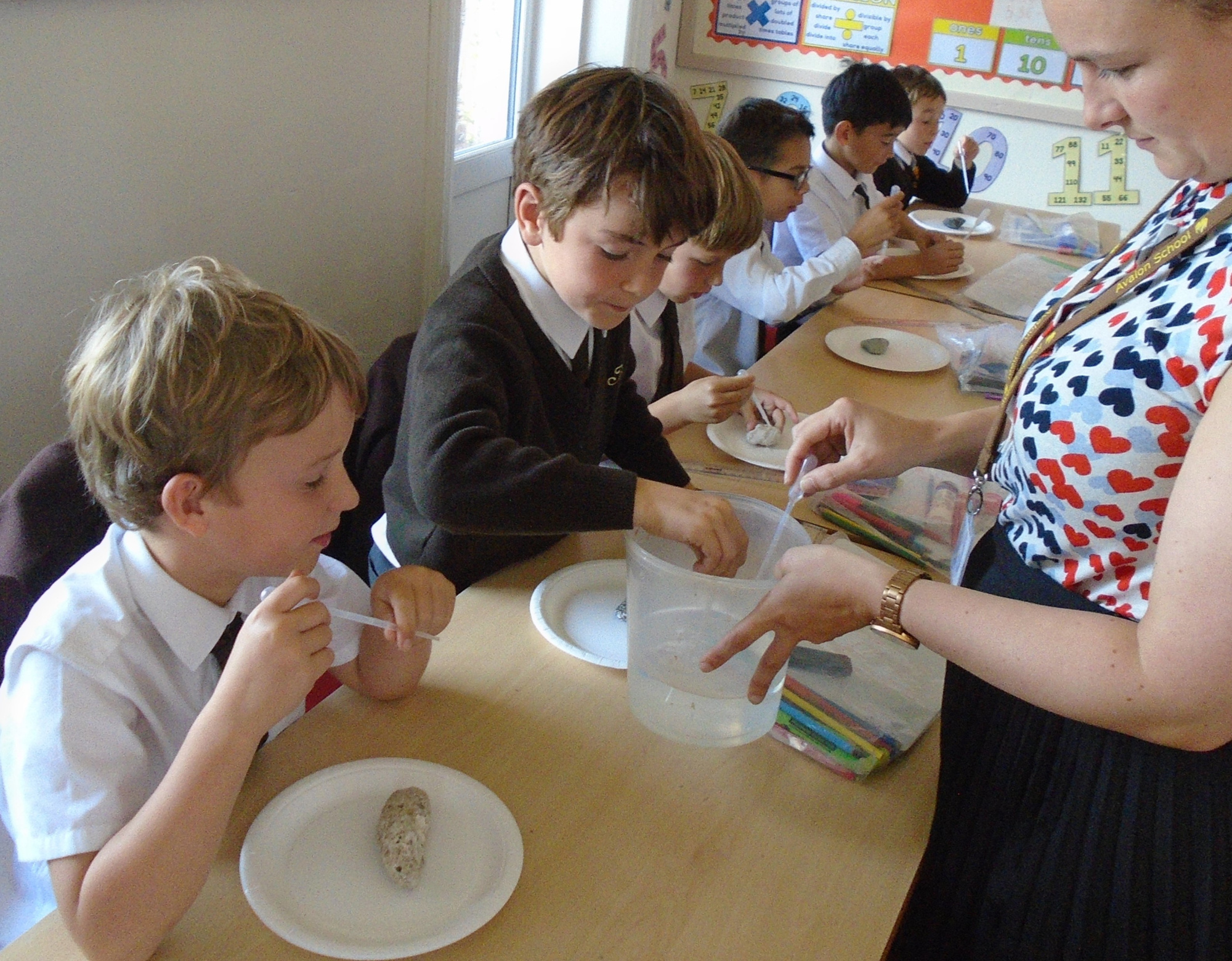 As part of our cross-curricular activities, during their Art lesson, Year 3 have sketched their own choice of Stone Age animal.  They have learnt how to use their pencil in various ways to create definition in particular areas. Once they were satisfied with the outline, they painted their image, again experimenting with different paintbrushes to complete their painting.

All approached their task with great enthusiasm! 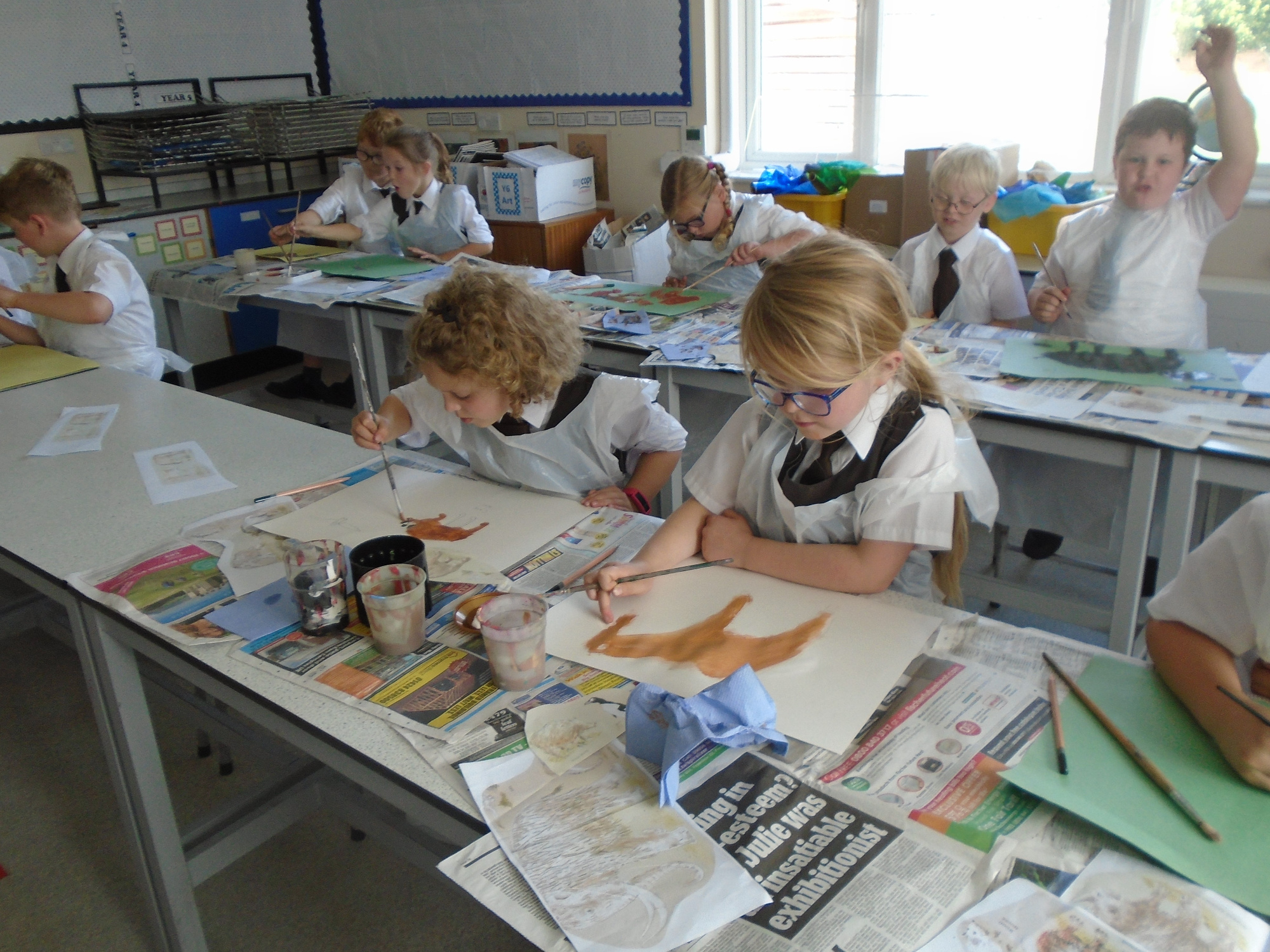 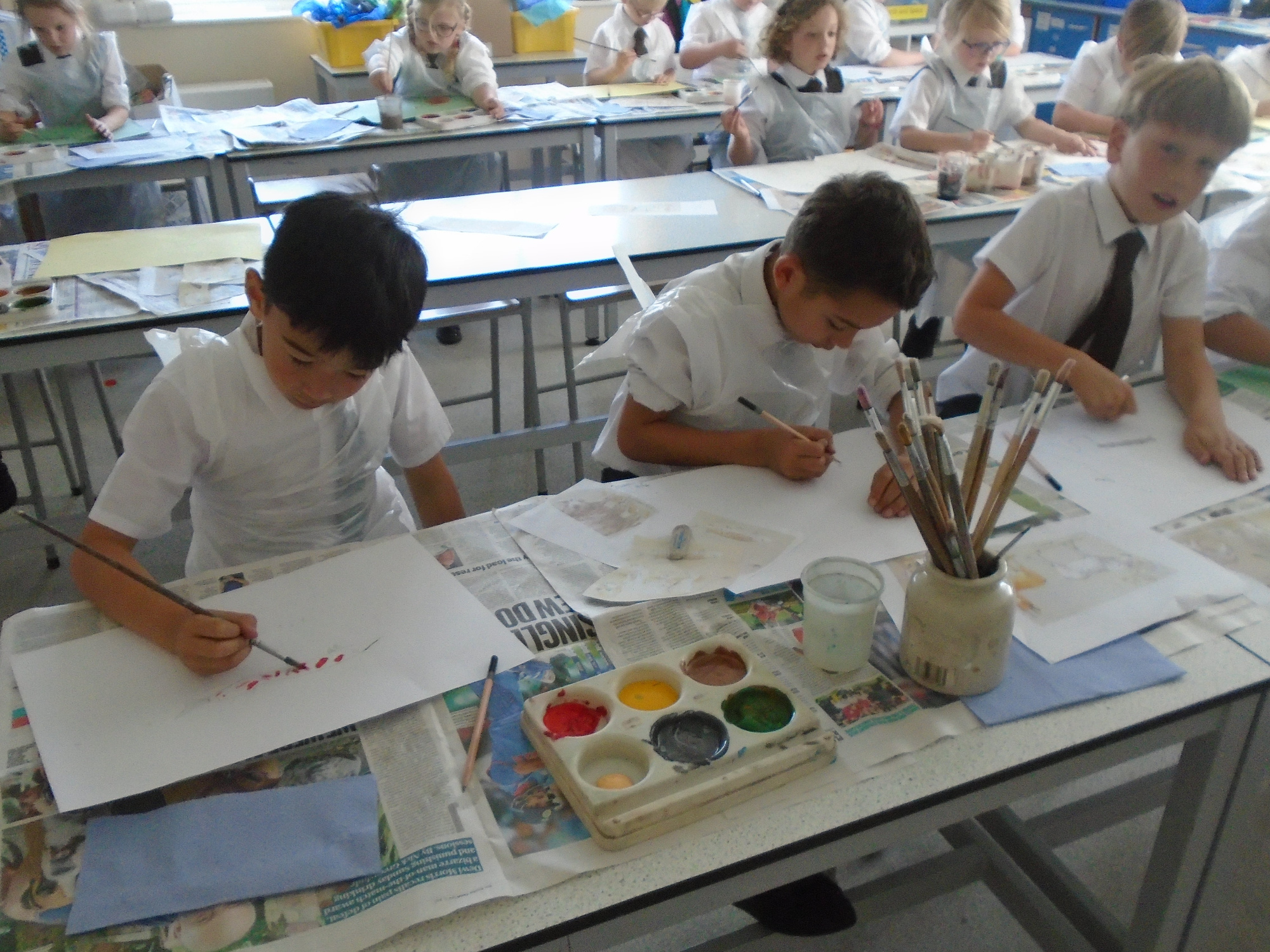 Year 3 have been looking at The Stone Age. They have been understanding how long the Stone Age period lasts and how we know this information.

Firstly, we compared 5000 years of time as a single piece of toilet paper. The Stone lasted around 3 millions years which meant it took a lot of toilet paper to show this period (see the photo of how much toilet paper Year 3 had to use). 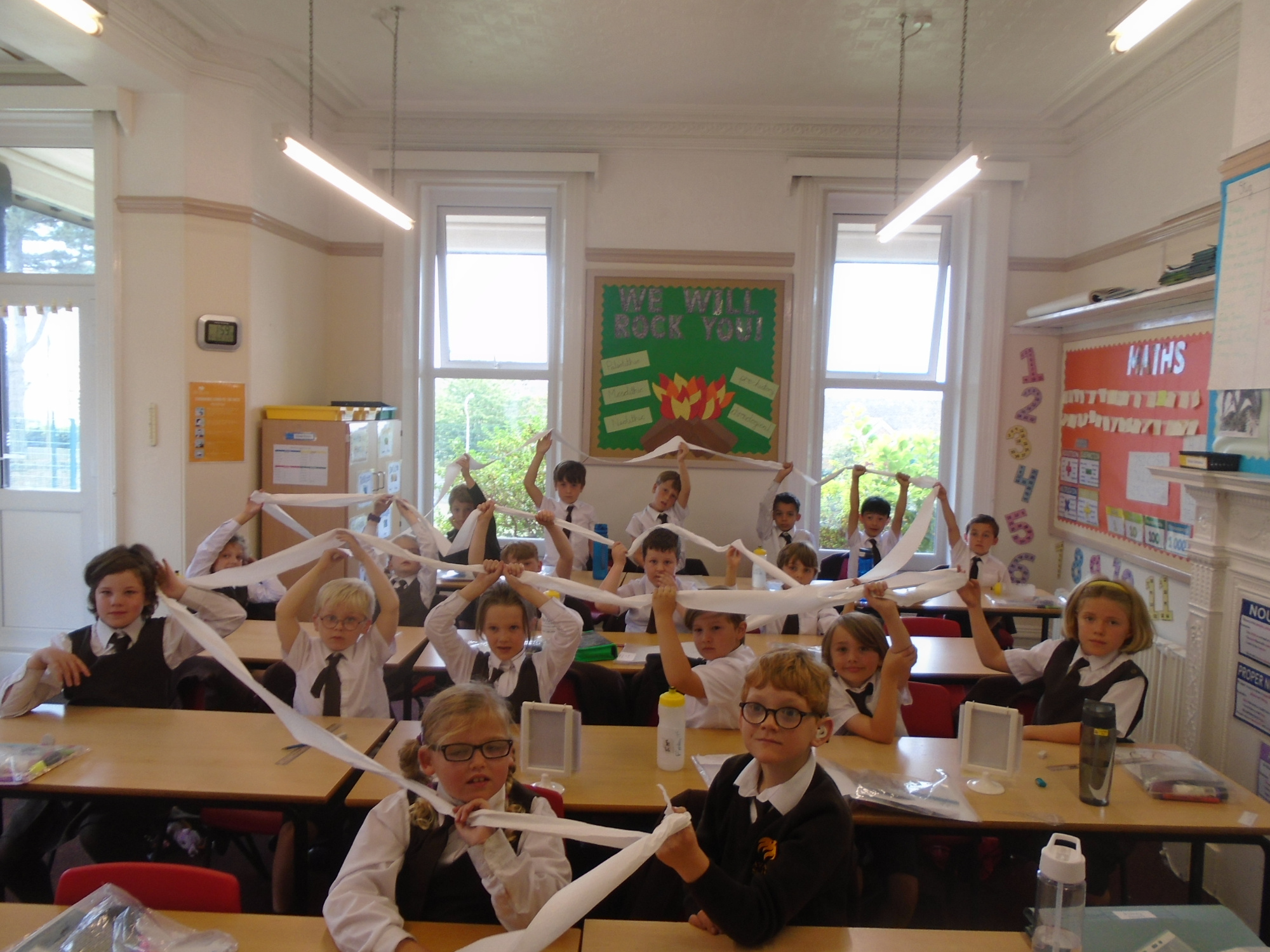 The Stone Age time is pre-history, which means before humans could read or write. Therefore, we know the information about this time through what archaeologists dig up.

Next, Year 3 took on the role of archaeologists and were excavating a chocolate chip cook to find the chocolate chip artefacts inside. They had a lot of fun doing this, ensuring they are careful and gentle with each artefact. They also learnt and understood how difficult an archaeologists job must be. 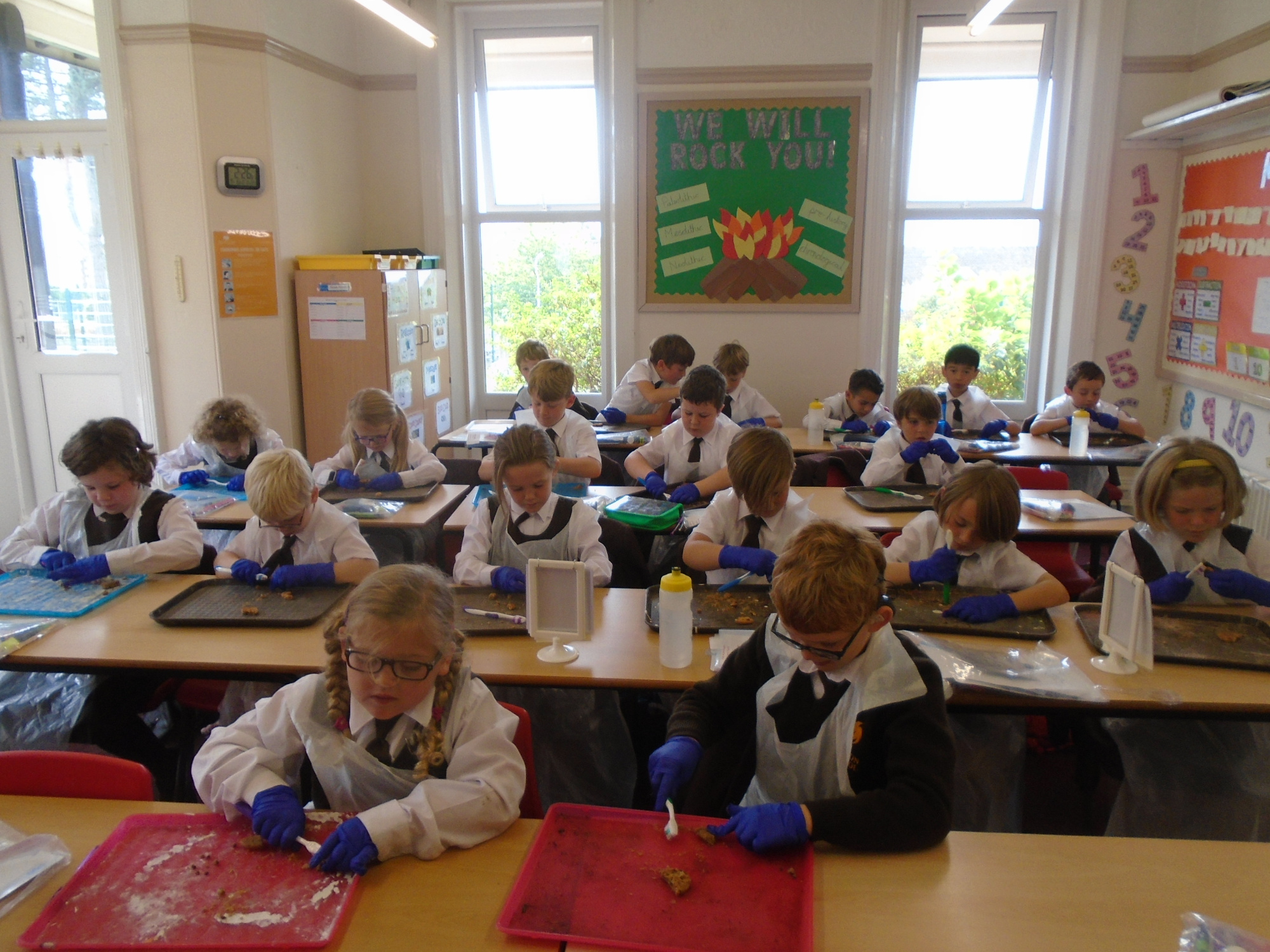 Finally, Year 3 looked at photographs of actual Stone Age artefacts and made predictions on what these artefacts may have been used as in the Stone Age times.

Stig of the Dump in English

The children are reading ‘Stig of the Dump’ in our English lessons, which is a story about a Stone Age man who lives in a dump.  Today, the children were acting out a scene between Barney, the main character, and the three mean boys from the nearby town. The children interacted with great enthusiasm and used excellent expression for their characters.  Se the Year 3 Gallery for more photos. 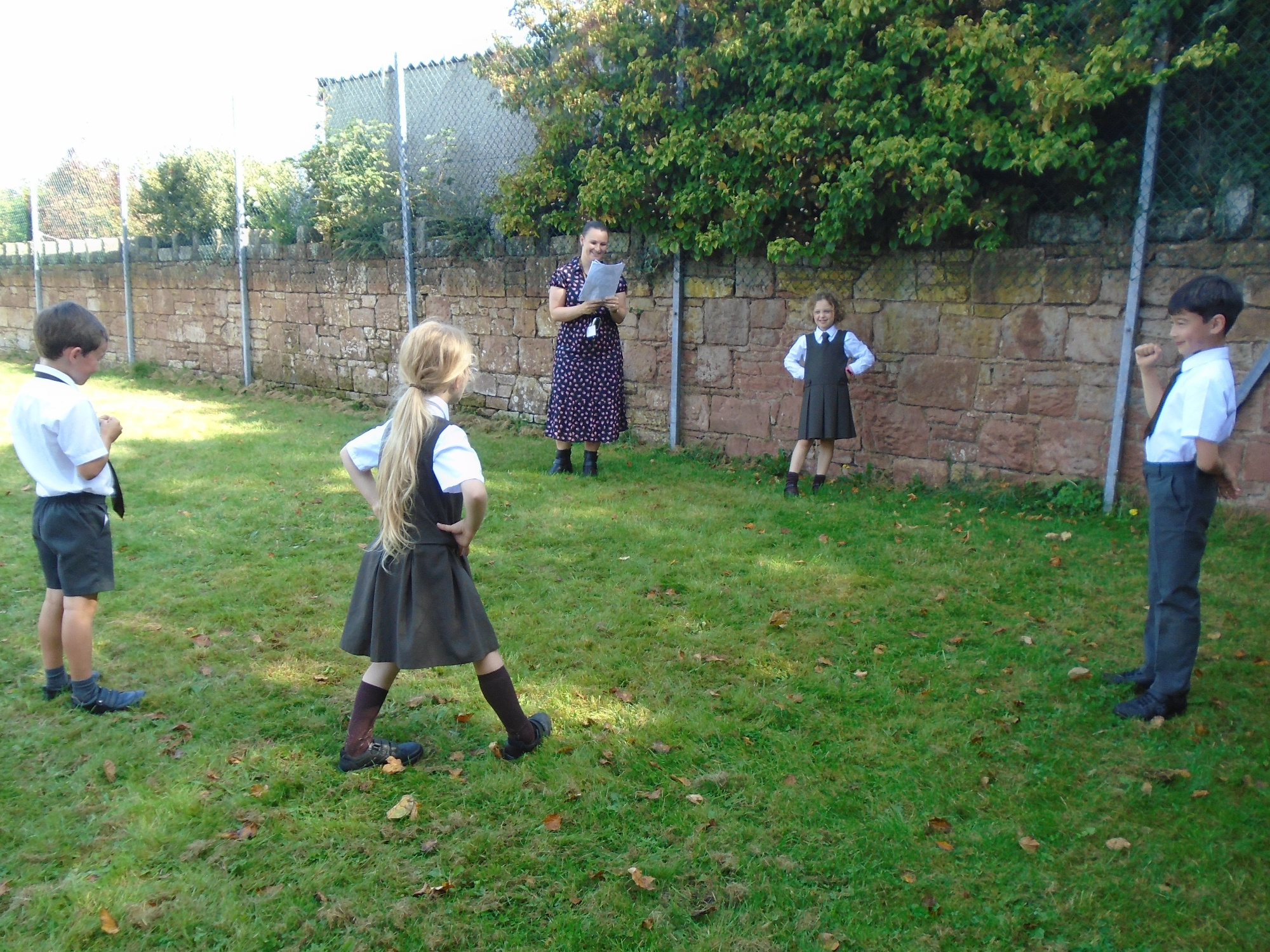